The stampede of activities, especially in regard to completing constitutional changes, seeks to show sufficient progress to open new clusters before the elections in the spring of 2022, but the results are lacking. The fight against corruption and organized crime remain critical areas in cluster 1, and anti-immigrant activities and rhetoric contribute to the radicalization of society, representatives of the coalition prEUgovor warned at the online presentation of the new Alarm Report on 18 November. 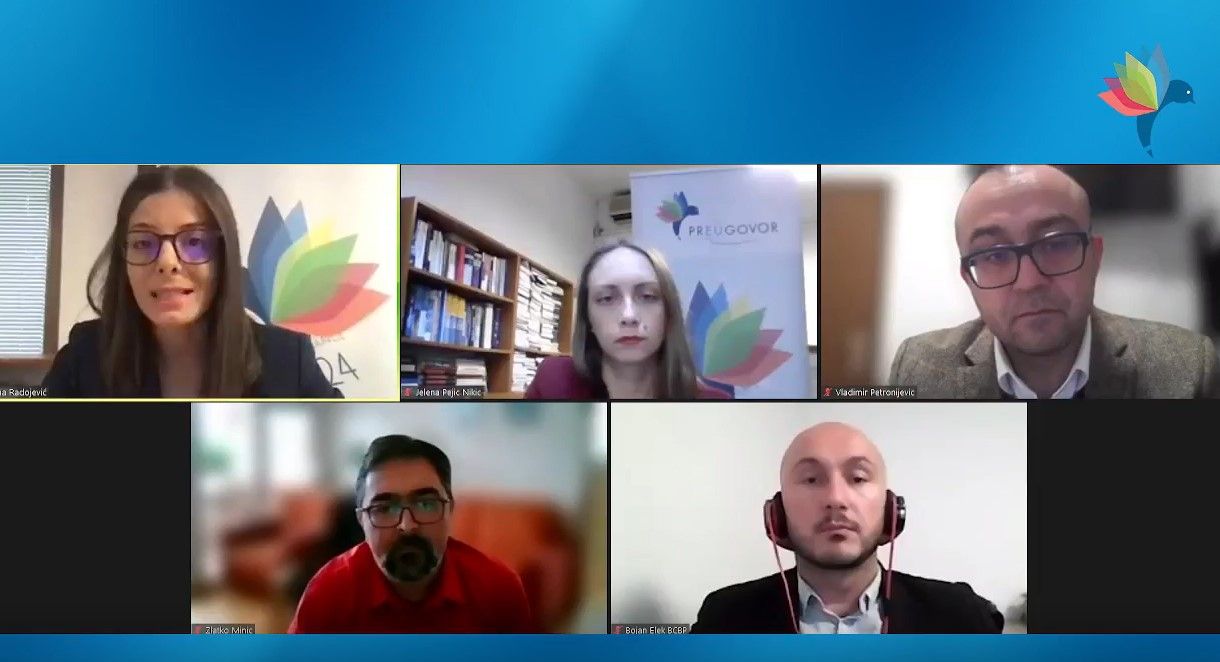 The editor of the Alarm Report, Jelena Pejić Nikić, a researcher at the Belgrade Center for Security Policy, pointed out that numerous activities were undertaken in the period from May to October 2021, but that the results were lacking. She emphasized that it is especially important for the Government of Serbia to open new clusters in the accession negotiations before the elections in the spring of 2022, after a two-year standstill. Normative activities prevail, which are only the first step to the desired change, and they are also carried out with a delay - in the postponed deadlines.

When it comes to constitutional amendments, Pejić Nikić reminded that the reforms in that regard started in 2017, but that only this year, after an obvious delay, activities were undertaken - the parliamentary committee formed a representative working group, public hearings were organized and solutions were repaired, which the profession is now mostly satisfied with. She asked why it hadn't been done that way from the beginning.

“There is not enough time left for the public to get acquainted with the goal of constitutional changes, and the citizens will have to decide on them in a referendum. Then they remembered that they had to pass a new law on the referendum, again at the last minute. Neither election nor referendum rules should be changed in the year before elections/referendum. In order to complete the process within the set deadline, this law must be adopted in an urgent procedure, which should not be the case with the law of such importance. The stampede of activities at the last minute harms the democratic processes”, she emphasized.

She also warned that the proposed Law on Referendum and People's Initiative contains dangerously imprecise provisions for this and future referendums.

“We are still living in a captured state. We strengthen the powers of institutions on paper, but they do not use them to control and oversee the executive, but rather obey that executive. Instead of changing the culture of docility of the people at the head of these institutions, the government is doing everything to keep the same people in key positions,” she explained.

Pejić Nikić concluded that it is good that the implementation of the action plans for Chapters 23 and 24 is officially reported again, although the assessments from those reports are sometimes contradictory, even incorrect.

Vladimir Petronijević, executive director of Group 484, highlighted that this report does not differ from the previous ones in terms of migration and asylum. According to him, Serbia is still a country that is recording a serious trend in terms of transit to the EU on the Western Balkan route. He underlined that in the current migration flows males are predominantly present (about 84%), mostly from Pakistan, Syria and Bangladesh. He added that in respect of Afghans, no significant migration movements have been noticed.

Petronijević mentioned some of the positive aspects when it comes to the treatment that migrants enjoy in Serbia: vaccination is enabled, enrollment in schools is carried out, and there are even examples of enrollment in colleges. However, he also spoke about the negative aspects brought about by migration flows.

“The activities of right-wing groups and xenophobic messages on social networks, directed towards migrants and refugees, contribute to the radicalization of society. The disproportion between the rhetoric about migrants and the real risks of threats is large and worrying. It is necessary to start a dialogue in the society about that,” he explained.

Zlatko Minić, from the organization Transparency Serbia, stated that there is no progress in key anti-corruption areas. He stressed that accelerated changes in regulations are practiced due to GRECO reporting. However, in his opinion, they do not give tangible effects, and also the existing regulations are not being applied. As examples of such actions he cited the (non)transparency of public procurement, problems in the management of public enterprises and problems in the field of competition, especially in infrastructure projects.

“One of the main objections of the European Commission is the small number of reported and closed cases of corruption. The statistics in this Alarm Report corroborate this. The main reason for that is the insufficient (pro)activity of public prosecutor's offices”, assessed Minić.

Also, Minić emphasized the great influence of the promotional activities of the President of Serbia. According to him, out of 220 activities in the period from May to October this year, one third were of a purely promotional character, outside the envisaged competencies of the president.

Bojan Elek, a researcher at the Belgrade Center for Security Policy, spoke about the situation in the Serbian police. On this occasion, he pointed out that the problems of the Serbian police are not the ability and capacities, but the organization and management.

“For years now, the problems have been the same - the relationship between the police and the prosecution, the operational independence of the police. The withdrawn Draft Law on Internal Affairs did not offer solutions to these problems, but would only mask them with cosmetic changes,” Elek explained.

Elek assessed that the political influence on the work of the police is constant, regardless of who the current minister is, and that the European Union and the coalition prEUgovor constantly remind us of that fact in their Alarm reports.

As for organized crime, Elek highlighted that the European Commission's report completely omits the “war against the mafia”, but mentions that it is necessary to switch to a strategic approach instead of the ad hoc approach applied so far. He cited the “Jovanjica” case as an example of obvious cover-up. The reports of the Ministry of the Interior state that it was the biggest seizure of marijuana, while the government is always trying to diminish the significance of the mentioned affair. Instead, in his opinion, the state is settling accounts with professional police officers.

“There is no good police without democracy - control and surveillance are key. We have civilian, but not democratic control over the security sector,” Elek concluded.

Jasmina Krunić, coordinator for public policies and development of the NGO ASTRA, in regards of the inhumane conditions in which Vietnamese workers are currently working on the construction of the tire factory “Ling Long” in Zrenjanin, reminded of another similar case that happened 14 years ago, concerning citizens from Serbia, Bosnia and Herzegovina and Northern Macedonia. According to her, it is the Serbaz case, one of the biggest attempts of human trafficking for labor exploitation in the region. Unfortunately, this case did not get its court epilogue in Serbia.

“Having in mind that the legal framework for action exists, it is our obligation to make this case different,” Krunic declared.

The complete recording of the conference is available here, only in Serbian.

The conference is organised as part of two projects implemented by the prEUgovor coalition:

"PrEUgovor for Rule of Law and EU integration of Serbia" supported by Balkan Trust for Democracy, a project of the German Marshall Fund of the United States and the Royal Norwegian Embassy in Belgrade.

The report from the event was prepared by the intern of the Belgrade Centre for Security Policy, Lana Savićević.