For stronger independence of the judiciary, it is necessary to change the Constitution and the "clerk’s mind" of judges and prosecutors

Although amendments to the Constitution lead to positive changes, this is only the first normative step. It’s necessary to change the laws, but also the practice and awareness of both judges and prosecutors, as well as the public, in order to really achieve the goal of judicial independence. That was concluded at the prEUgovor online expert workshop held on November 10. 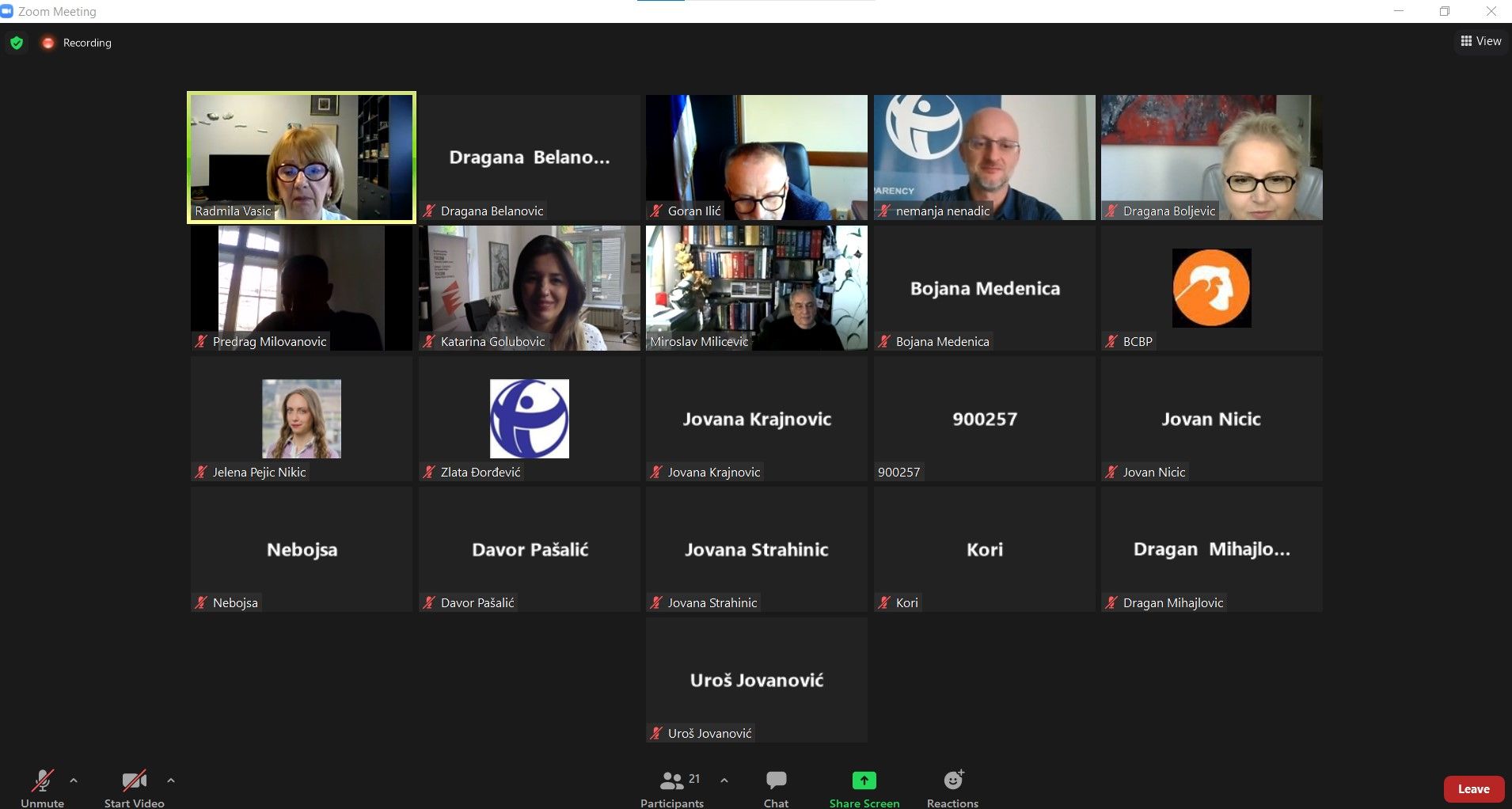 Dragana Boljević from the Judges’ Association of Serbia spoke about the process of amending the Constitution of Serbia during 2021 and the extent to which constitutional amendments can increase the independence and efficiency of the judiciary. She pointed out that the constitutional text contains nomotechnical shortcomings, some of which could not be eliminated, given that the amendments to the Constitution are limited only to certain provisions, and that the text could have been better if it had been written in ideal conditions and without haste.

“The most serious shortcoming of this text is the five-member Commission as a mechanism for unblocking the parliamentary election of four prominent lawyers to the High Judicial Council (HJC). It is a channel for the government to influence the composition of the HJC. Montenegro had a similar problem in practice,“ Boljevic underlines.

Among the good solutions of the Draft Act on Amending the Constitution, Boljevic emphasizes the fact that judges who are elected for the first time, court presidents and 7 members of the HJC will no longer be elected by the Assembly, and that there will be no executive and legislative representatives in the HJC. It is also positive that the probationary term of judges is being abolished, and guarantees of immobility and freedom of expression of judges are being strengthened.

“Even the perfect constitution does not have to be a guarantee of an independent judiciary. It is important how it is further elaborated by judicial laws and how it is applied, as well as that politicians do not irritate the public against the judiciary as they have done,“ Boljevic concluded.

“Amendments to the Constitution are only a normative step towards changing the way public prosecutors and judges perceive themselves now - as clerks. Until this perception changes, and until we learn freedom and self-respect, there will be no real reform of the judiciary,“ he stressed.

Ilic also stated that the decision from the Draft expands the full functional, material immunity, so that, once the Constitution is amended, it will not be possible to hold a public prosecutor accountable for an opinion given in the media, if what s/he said was in any way related to the performance of his/her function.

As he highlighted, the Venice Commission also gives an unequivocal recommendation that the Supreme Public Prosecutor and the Minister of Justice should be excluded from the High Prosecutors’ Council . The Commission finds that the reason for excluding the Supreme Prosecutor from the Council would be in his hierarchical influence which would impede the free decision-making of the professional component of the Council. When it comes to the Minister of Justice, the reason for the exclusion is that the political person in that body could endanger the impression of the political neutrality of the Council, explained Ilić.

Katarina Golubović from the Lawyers’ Committee for Human Rights (YUCOM) said that the representatives of the civil society pointed out numerous issues to the Committee for Constitutional and Legislative Issues during the two public hearings, but that the members of that committee ignored those objections.

As she stated, without budget autonomy, there is no complete independence of the public prosecutor's office. Even with these constitutional amendments, this important body remains without the possibility to decide on the budget allocation on his own.

“In the absence of an explanation for the adoption of draft constitutional amendments, it is not clear why this element of independence was abandoned. The dependence of the prosecutorial budget on the decisions of the executive leaves room for influence on the decision-making regarding the prosecution of perpetrators of criminal acts“, she said.

According to Golubović, the Constitutional Law leaves the door open for postponing the transition of the judiciary, and especially the “hidden postponement in Article 10“ which refers to the president of the Supreme Court of Cassation (SCC), who will keep that function until the end of his term. While according to the wording of the constitutional amendments, re-election to this position is not allowed, the constitutional law allows the current president of the SCC to be re-elected after the expiration of his mandate.

“The possibility of re-election of the Supreme Public Prosecutor, who will replace the current Republic Public Prosecutor, should be equally considered, although this is not explicitly emphasized by the Venice Commission. Namely, in practice, if this solution of the Constitutional Law were to remain in effect, we could end up in the situation of delayed transition, meaning that the same person could be at the top of the hierarchy in the prosecutor’s office for four full terms, for a total of 25 years“, Golubovic said.

The program director of Transparency Serbia, Nemanja Nenadić, spoke about the new draft law on the referendum and the people's initiative, which entered the parliamentary procedure yesterday, in the context of amendments to the Constitution. Among the objections of the coalition prEUgovor is the issue of formulating the information that is submitted to the citizens, which is decided on in the referendum and what opinions exist about the answer offered to the citizens, said Nenadic and added that the competent election commission prepares that information.

“It remains unclear how the election commission will find out what different opinions and reasons exist for giving answers ’for’ "and ’against’ in the referendum, so there is a possibility that citizens will not be able to take those reasons into account“, he explained.

“It is a great danger and it is necessary to specify this issue in detail. Also, the issue of financing the referendum campaign should be regulated in more detail, instead of being left to be resolved through the application of the Law on Financing Political Activities,“ Nenadic highlighted.

The solutions from the Law on Referendum and People's Initiative should be followed carefully, not only in the context of constitutional amendments, but also other issues, and some have already been nominated in public to be resolved by referendum - Rio Tinto, Kosovo status, added Katarina Golubović.

The aim of the prEUgovor expert workshop is to assess the extent to which the current proposal to amend the Constitution of the Republic of Serbia achieves the goals of constitutional reform set out in the Action Plan for Chapter 23 of the EU accession negotiations, whether the judiciary and public prosecutor's office can be expected to be independent and work more efficiently after those changes.

Planned amendments to the Constitution in the field of justice and the New Law on Referendum and People's Initiative were the subject of criticism and recommendations of the Venice Commission and civil society organizations in Serbia, and the coalition prEUgovor also proposed specific amendments (informing citizens about the referendum issue and different positions, referendum campaign and its financing).

The workshop is part of the "prEUgovor for the Rule of Law and EU Integration" project, the implementation of which was made possible by the Balkan Trust for Democracy, the project of the German Marshall Fund of the USA, and the Embassy of the Kingdom of Norway in Belgrade.