Insufficient progress of Serbia in chapters 23 and 24

Serbia is not using sufficiently the incentive of the European integration for social reforms, and transparency of negotiation process should be improved in order to stop further deterioration of situation, were the conclusions of coalition prEUgovor’s conference held on May 24th 2017. in Media Center Belgrade.

Eighth prEUgovor report on progress of Serbia in chapters 23 and 24 was presented during the conference. Representatives of the coalition have agreed that there are multiple obstacles in independent monitoring of the process, among which limited access to information on the activities of state institutions is the most important.

"We do not have institutional mechanisms wich would enable the measuring of progress in negotiation process. In many segments we don’t even know what has been done", stressed the researcher of the Center for Applied European Studies​ Milan Aleksic.

Presidential elections were one of the main causes of stagnation of the reforms in the monitored period, said the Program Director of Transparency Serbia, Nemanja Nenadic.

"The elections have served as a good excuse for not fulfilling the obligations of action plans, even though the Serbian President jurisdiction is not very important for the European integration. On the other hand, the National Assembly has suspended its work, while the members of the government were involved in the presidential campaign", said Nenadic.

Serbia has done nothing to resolve the problems pointed out by the international observers after the election in 2016, added Nenadic.

Director of the Center for Investigative Journalism in Serbia​ Branko Cecen said that the debate on the situation in the media is a moot point and that the causes and the changing of the current situation should be discussed.

"In the last prEUgovor report it was pointed out that in Serbia criminal offenses related to corruption are not punished or are penalized with minimum penalties. In the local media this remains unnoticed, although the data was presented at the press conference", Cecen pointed out.

Important topics for the citizens, such as the completion of hundreds of thousands of court cases without prior notification to the participants in the disputes, does not have sufficient presence in the media, Cecen added.

Autonomous Women's Center representative Vanja Macanovic regarding the completion of 300,000 executive cases mentioned by Cecen that is the example of resolving the backlog of cases in the wrong way.

"Unfortunately, this is the manner of solving problems in Serbia. Individuals may not have their debts collected if they do not have the money for a retrial or because of the statute of limitations", emphasized Macanovic.

She assessed that the entry into force of the new Law on Combating Domestic Violence is a great success. This law brings emergency protective measures, risk assessment for reduction of the number of victims, mandatory records and obligatory coordination of relevant stakeholders.

The conference is a part of the project "prEUgovor Policy Watch: Monitoring Reforms in Chapters 23 and 24". This project is funded by the European Union. 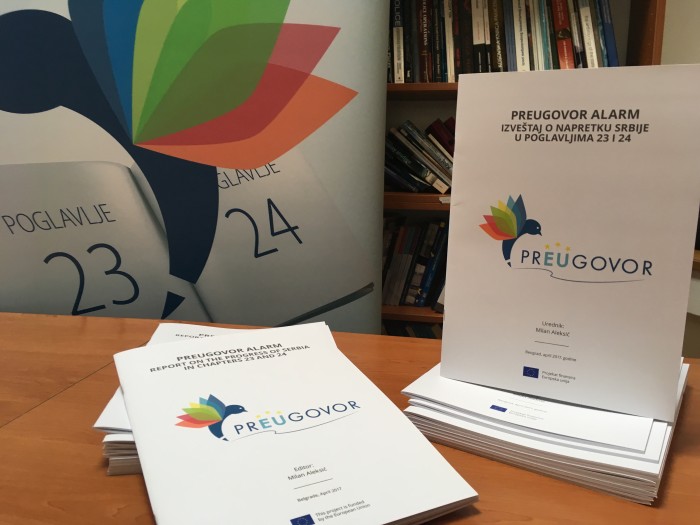 Challenges after openning Chapters 23 and 24