Intensified Reform Activities Are Still a Form without Substance 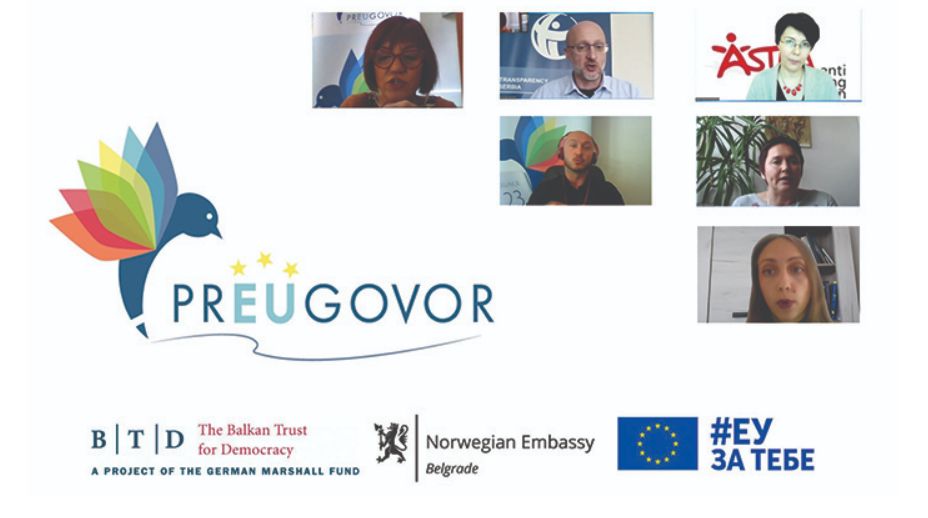 After a lost year in the process of European integration of Serbia, activities have intensified, but the government's approach to reforms still remains a mere form without essence, it was pointed out at the online presentation of the latest Alarm Report of the prEUgovor coalition.

“This is the time for make-up exams. The Serbian government is working to get a passing grade before the non-paper for Chapters 23 and 24, which is expected in June. The opening of new chapters or clusters depends on that. Now is the key moment to put pressure to show the results”, pointed out the researcher of the Belgrade Center for Security Policy and the editor of the Alarm Report, Jelena Pejić Nikić.

Pejić Nikić pointed out that the prEUgovor coalition is not convinced that there is a will to implement reforms, not only to move away from a standstill but also to depart from the previous practice, in which reforms are turned upside down. One of the examples is the unblocked procedure of amending the Constitution in the area of judiciary. Although its official goal is to strengthen the guarantees of the independence of the judiciary, attacks on judges and the judiciary continue at the same time, even in the Parliament. She warned that the narrative is being built as if the influence of the legislative power, elected by the people, on the judiciary should be increased, and not reduced.

Vanja Macanović from the Autonomous Women's Center presented the results of monitoring in the areas of prohibition of discrimination, gender equality and violence against women.

“On the national day of remembrance of murdered women, the state adopts a law which privileges the financing of services for perpetrators of violence - the financing of those services from the budget is envisaged, and it will begin immediately after the adoption of the law. Services for victims of violence will be funded from the local budget and will begin on January 1, 2024. There is a discourse in the media in which government representatives support the victims, but when that support needs to be formalized by law, that does not happen”, Vanja Macanović explained.

She warned that the proposed laws, that are being discussed today in the Parliament, contain solutions that were created after and beyond the public debate. She also pointed out that it is necessary to establish a Deputy Commissioner for the Protection of Equality by law, because in the period until Commissioner Brankica Janković was not re-elected to that position, that body did not function for half a year, which reduced the number of reported violence.

During the event, it was pointed out that in the areas of domestic violence and human trafficking, there is no adequate support for victims, they do not trust institutions, and they are additionally discouraged and frightened by a lot of media space provided to perpetrators.

“All available assistance and support to the victims should be provided, without conditioning them by participating in court and investigative proceedings. Criminals are most often protected by the fear of the victims. There is human trafficking in Serbia, but it is invisible also because we have local powerful people who have all the tools to manifest their power and influence“, pointed out Jasmina Krunić from the organization ASTRA - Action against human trafficking.

She emphasized that more than two thirds of victims of human trafficking had some experience of violence before that, and official figures show that 21 victims of human trafficking were identified in Serbia from January to April this year. She pointed to the frightening fact that, to each identified victim, there are at least ten victims who remain invisible. As she stated, on the example of Jagodina, we can see a parade showing power in which it is impossible to expect someone to come forward and say “I am a victim“.

When it comes to police reform and the fight against organized crime in Serbia, the problems have been known since the beginning of the negotiation process, the EU warns about them, but little has been done to solve them.

“Operational autonomy of the police is a key problem that the Government of Serbia should solve and the test it failed in the previous period. Politicians must not fight organized crime - professionals must do that. In Serbia we have a media spectacle with brutal scenes and a polygraph as the main evidence in the eyes of the public“, pointed out the researcher of the Belgrade Center for Security Policy Bojan Elek.

He reminded that in key cases such as Belivuk and Jovanjica, the connections between organized crime and high-ranking officials have not been investigated, and only investigative journalists have written about it so far. Elek stated that another problem, which is a consequence of the politicization of the security sector, is the scandal related to the wiretapping of the president. In this case, there are indications that special investigative measures are being abused and that there is no effective system to control their application.

“An intensive public officials' campaign is the main problem related to the elections, and there is absolutely no will to solve it. The local elections in Kosjerić and Zaječar were a clear demonstration of the public officials' campaign. The issue of financing political activities is also critical, which will certainly gain in importance before the expected referendum on constitutional amendments“, stressed Nemanja Nenadić, program director of Transparency Serbia.

Nenadic reminded of the negative trend in the field of public procurement, which continued in the previous period, i.e. that the largest deals are concluded without any competition on the basis of interstate agreements, and that all procurements related to the pandemic in Serbia are secret. He also mentioned the illegal situation in the management of public enterprises, considering that the Government continues to, even retroactively, legalize the status of acting directors.

Nenadic also warned of the danger of spoiling the Law on Free Access to Information of Public Importance, which is currently being amended, by lowering the level of acquired rights and increasing the possibilities for restricting the right to access information.

The conference is organised as part of two projects implemented by the prEUgovor coalition:

"PrEUgovor for Rule of Law and EU integration of Serbia" supported by Balkan Trust for Democracy, a project of the German Marshall Fund of the United States and the Royal Norwegian Embassy in Belgrade.