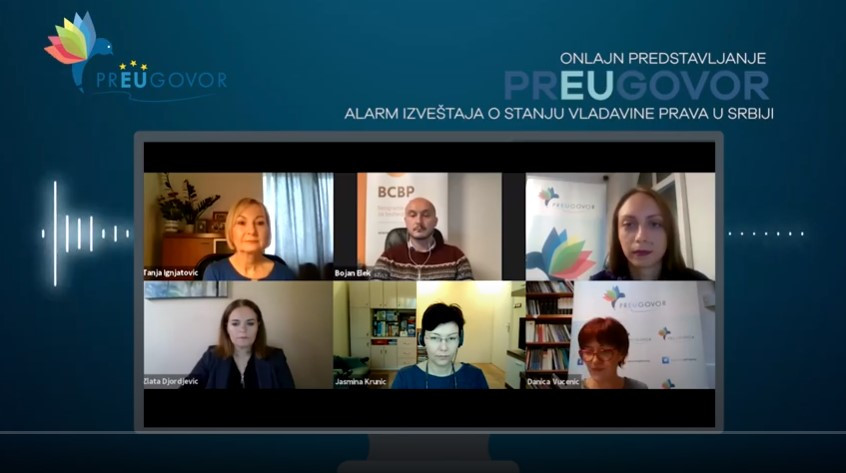 The general finding of the new prEUgovor’s semi-annual Alarm Report is that almost nothing was done in the Chapters 23 and 24, from May to October 2020. The report was presented on November 17th via Zoom. The conference concluded that the report documents state capture in various areas - drawing public resources for the ruling parties' election campaign and through non-transparent procurement, politicization of law enforcement agencies, which leads to selective justice, and negligence towards the needs of particularly vulnerable groups.

The editor of the Alarm Report, Jelena Pejić Nikić, a researcher at the Belgrade Centre for Security Policy, pointed out that the report concluded that there was no progress in most of the observed areas. As reasons for that, she stated that nothing was done due to the elections, the formation of the new convocation of the Assembly and the late formation of the Government. She assessed that due to the lack of reforms in the area of ​​Rule of Law, Serbia did not open any new negotiating chapters in 2020, and reminded that Serbia still does not have a head of the Negotiating Team, nor was the decision to accept the new accession methodology officially confirmed.

"Without reforms in the area of ​​the Rule of Law, there is no progress in society, no continuation of European integration, no opening of new chapters, and no EU funds. Serbia has not opened a single new negotiating chapter this year, and that should be interpreted as a consequence of the lack of reforms in the area of the ​​Chapters 23 and 24," Pejić Nikić pointed out.

Pejić Nikić cited the adoption of revised action plans for the Chapters 23 and 24 as a positive thing, but civil society and the Coalition prEUgovor are not satisfied how those plans turned out, as many of their recommendations have not been acted upon.

She added that the Government's intolerance of criticism remains of particular concern. She warned that the action of the Administration for the Prevention of Money Laundering in July against dozens of organizations and individuals, including two members of the Coalition prEUgovor, is perceived as an act of intimidation, on an unjustified grounds for suspicion.

"The general assessment is that the changes that were agreed during last year's dialogue on election conditions, mediated by the European Parliament, had minimal effects. Unfortunately, the main problems we have been pointing out for years have remained. There were no changes when it comes to the functionary campaign. Additionally, the Law on Prevention of Corruption entered into force on 1 September, but was adopted 14 months earlier. Until the law came into force, no important changes were made, and, despite the long deadline that was again exceeded, the Council of the Anti-Corruption Agency was not elected. In a situation when the Agency does not have a Council, no measure can be imposed for any of the identified violations, " Djordjević explained.

As particularly critical areas, Djordjević mentioned access to information of public importance, which is even more important during the pandemic, and public procurement, having in mind that the Government continued to directly negotiate deals, instead of organizing tenders.

Djordjević concluded that for a positive shift, it is necessary for the government to have the political will to stop faking reforms, to approach the reforms in a more serious manner and to include all those interested in the process, especially civil society organizations.

Tanja Ignjatović from the Autonomous Women's Center pointed out that, in the area of ​​anti-discrimination policy and gender equality, we have lost another year in which deadlines were moved and there were no essential changes. She said that the state relies on the civil sector in the field of prevention and suppression of violence against women and that no project that provides assistance to victims has received financial support from the state.

Ignjatović emphasized that the recommendations of the GREVIO expert group, which reports on the implementation of the Convention on the Prevention of Violence against Women and Domestic Violence of the Council of Europe, received in January this year, did not affect the revision of the Action Plan for Chapter 23.

"It is necessary that there is better information coming from the public sector, from institutions, and much more field work, primarily in relation to those women who are marginalized and who find it harder to get to institutions, support and protection," Ignjatović emphasized.

Jasmina Krunić, from the organization ASTRA - Anti-Trafficking Action, pointed out that in the revised Action Plan for Chapter 24 the fight against trafficking in human beings is almost invisible and the laws regulating this area are pending.

"The COVID-19 pandemic has exposed and highlighted everything that does not work in the field of combating human trafficking. The normative and strategic framework is on hold. The state relies on the results of civil society organizations, although it does not provide funds for them, " Krunić emphasized.

She also pointed out that this year, the state often reacted completely inadequately to various cases, such as, for example, labour exploitation of migrants. She stated that this year ASTRA had twice as many calls compared to the same period last year, as well as twice as many field interventions.

Bojan Elek, a researcher at the Belgrade Center for Security Policy, emphasized that the fight against organized crime is one of the basic demands of the European Union for the continuation of Serbia’s European integration. He stated that in the previous period, Serbia faked the fight against organized crime with mass arrests without court epilogues, but that stopped as a consequence of the pandemic. However, the killings on the streets did not cease.

"The war against the mafia led by the President, and later found in the Prime Minister's exposé, is a public performance, since the key for the state to effectively fight organized crime is to cut ties of the organized crime with politics and the police. The fight against organized crime should be led by professionals from institutions, not politicians. Organizational reform of the police is therefore a precondition for reforms in the entire Chapter 24", said Elek.

Elek assessed that the Alarm Report presents what a state capture looks like in several snapshots - the government protects itself by legalizing bad practices, fakes the fight against corruption and organized crime, and neglects the most vulnerable groups. The authorities capture the institutions that enable the extraction of resources or circumvention of penalties, and do not care about the citizens, especially not about the victims, Elek concluded.

The conference is part of the project "prEUgovor monitoring reforms in Chapters 23 and 24", funded by the Embassy of the Kingdom of the Netherlands in Belgrade.