Shrinking Space for Dialogue Worsened by Attacks on Critical Voices 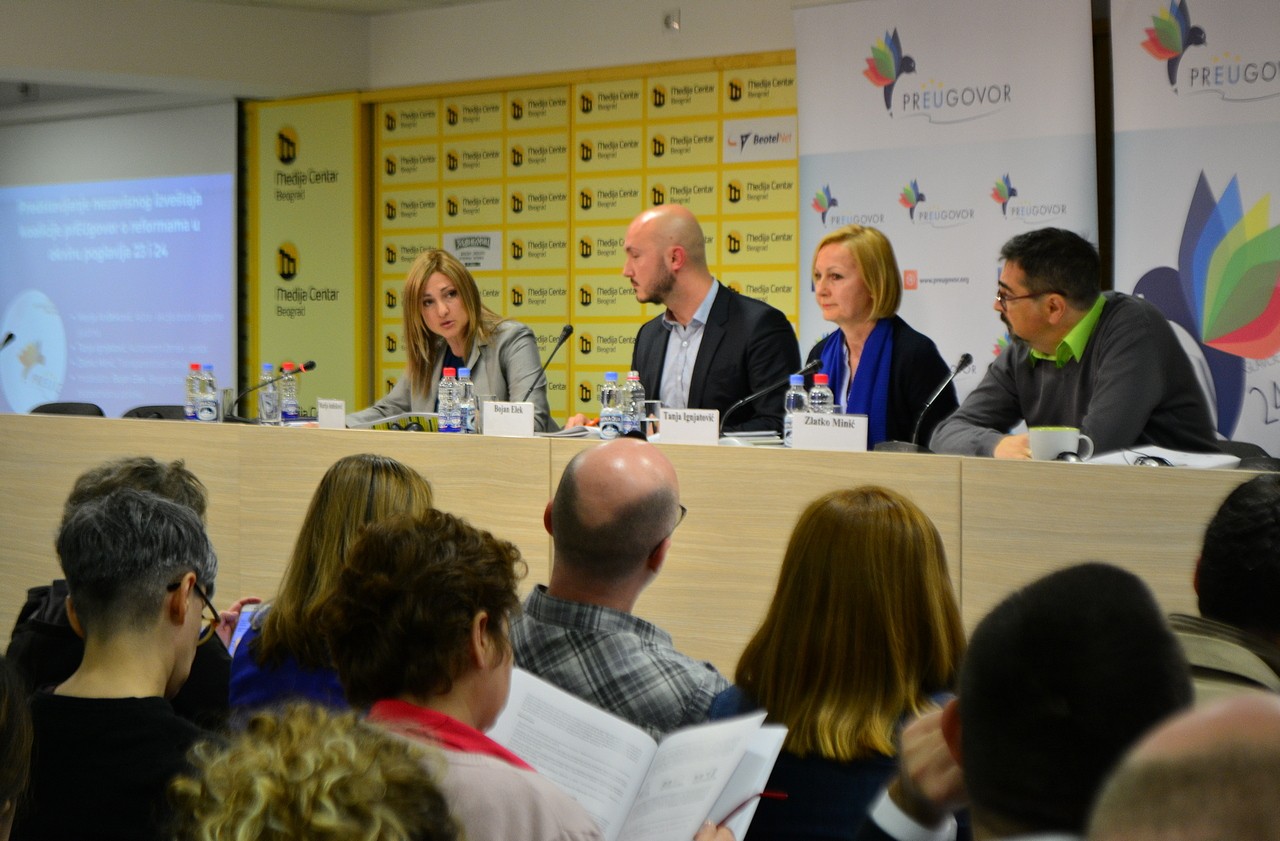 Adoption of poorer legal solutions, with lack of dialogue, collapse of independent institutions and attacks on civil society organizations continues under the auspices of reforms in the EU accession process, but there is room for improvement if the recommendations given in the revision of the action plans are adopted, it was highlighted at the presentation of the latest Coalition prEUgovor Report on Progress of Serbia in Chapters 23 and 24, held on April 16, 2019 in Belgrade.

Since Serbia and other Western Balkan countries are becoming captured states, it is key that the European Union continue its enlargement policy after the European elections in May, discussion moderator Bojan Elek, Belgrade Centre for Security Policy (BCSP) researcher, highlighted. The EU needs to pay attention to these problems by using new instruments such as special reports that analyze the mechanisms that threaten democracy and lead to the capture of state institutions for political purposes, modeled on the Priebe Report, Elek pointed out.

In addition to the collapse of the institutions, the fact that only slightly more than half of the planned activities under Chapters 23 and 24 have been carried out, says Zlatko Minic from Transparency Serbia.

"We do not see the Government's interest in politically making the fight against corruption an end in itself. As for the Chapter 23 Action Plan, it is not being met and its review does not bring much positive. The amendments bring about a number of bad decisions - modifying the composition of the Anti-Corruption Council to include ministry representatives, thereby reducing independence; amendments to the Public Procurement Law are planned only to comply with EU rules and not for better oversight, to amend the Agency Act anti-corruption measures are issued solely to fulfill the GREKO recommendation, not to eliminate omissions. Also, the final decision to introduce the criminal offense of 'illegal enrichment' has not yet been made, ”Minic said.

There is also no visible progress in the fight against high-level corruption, Minic concluded.

Checking boxes INSTEAD OF MEASURABLE EFFECTS

"Deadlines are delayed and obligations are formally implemented in order to move to the next step, while there are no results on the ground," Minic said.

In addition, the problem is that the introduction of worse legal solutions is considered a fulfillment of the obligation. An example is the draft Law on Free Access to Information and the Law on Checking the Origin of Property, which could worsen and worsen the situation in these areas, Minic concluded.

Marija Andjelkovic of Astra - Action Against Trafficking in Human Beings agreed that the general conclusion, after reviewing the revised Chapter 24 documents, was that the auditors were concerned with formal rather than substantive matters.

"It all comes down to the adoption of laws and strategies, and there is little talk about what it will do for ordinary citizens and how it will affect their lives," Andjelkovic pointed out.

She stated that three good things that happened during the observed period related to human trafficking were that it was transferred from the jurisdiction of the border police to criminal, that the first state shelter for victims of trafficking was opened, and that standard operating procedures were adopted for dealing with the victims, while the number of staff in the area and the penal policy remain insufficient.

The trend of "tickling" activities that were not done as intended or not at all is an alarming trend, Andjelkovic pointed out. She concluded that state authorities' reports were "huge narratives" of the results achieved without emphasizing the activities to be undertaken or what the effects were.

ABUSE OF THE FIGHT AGAINST VIOLENCE AGAINST WOMEN

Tanja Ignjatovic of the Autonomous Women's Center (AŽC) also pointed to the problem of dealing with form instead of substance, without knowing the situation on the ground. In the area of ​​women's fundamental rights, the context has even worsened, Ignjatovic said.

"The Committee on the Elimination of Discrimination against Women (CEDAW) asks our government to take all necessary measures to combat anti-gender discourse, expresses concern about the high presence of discriminatory gender stereotypes in public speaking, unsanctioned misogynistic statements in the media, and promoting conservative ideas about the traditional family. has been exacerbated by a national campaign to encourage birth, ”Ignjatovic emphasized.

The capture of the state is also exemplified by the establishment of a national SOS line for women victims of violence, to which the AWC has already warned. Ignjatovic explained that contrary to the law and strategic documents, as well as to the argued opposition of women's organizations with decades of experience in this field, the realization of the national SOS hotline service was awarded to a state institution that has never dealt with this topic.