During the negotiations with the EU, Serbia will have to make very important decisions that will significantly affect its future and the lives of citizens. Therefore, the participation of civil society is necessary, not only to monitor the process, but to be consulted too – these were conclusions at the conference organized by the coalition prEUgovor (in English preEUnup). 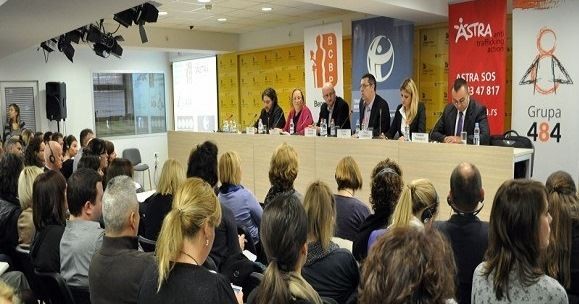 The coalition prEUgovor believes that in this stage of Serbia-EU negotiations it is essential to make process transparent, to secure systematic fight against corruption and respect for human rights, especially for the members of vulnerable groups.

These are the points representatives of all six prEUgovor member organisations presented at conference organised held in the Media Center on October 1, 2013 in order to present the first independent report on Serbia’s progress in key chapters of EU accession process.

“We believe that negotiations are an opportunity to consolidate reforms considering the rule of law in Serbia. The main objectives are achieving substantial progress in the further democratization of Serbia and monitoring whether agreed steps are having the effect on lives of ordinary citizens," said Sonja Stojanovic Gajic, Director of the BCSP, an organization that initiated establishment of the coalition prEUgovor.

Executive Director of the Center for Applied European Studies (CPES), Srdjan Djurovic, stated that at this stage of the Serbia-EU negotiations it is crucial to enable the participation of the civil society and the transparency of the process.

"The entire negotiation process, especially the establishment of Serbia's negotiating position and reporting on it, must be transparent. The institutional structure for monitoring the negotiations must be established. Participation of civil society means not only that CSOs should oversee the process, but they should be consulted as well. This is necessary so that Serbia could emerge from the European integration process as a solid state, with good administration, and the laws that are implemented," Djurovic said.

Transparency is a precondition of the fight against corruption

Program director of the Transparency  Serbia (TS) Nemanja Nenadic said that in Serbia is present problem with the transparenscy of a decision-making process in many areas, which encourages corruption.

„We are witnesses that, due to the influence of political will, in Serbia have been initiated criminal investigations.  However, it is unclear whether the institutions formed for this purpose will continue to fight against corruption even if there will be a lack of political will in the future“, said Nenadic.

Sonja Stojanovic Gajic pointed out that the BCSP research indicated that the key risks of corruption in the security sector are mostly present in the processes of public procurement which are not transparent.  She said that the key actors in fight against corruption - Ministry of Defence, Ministry of Interior and Security Information Agency, conduct 15, 55 or 95 % of all procurement by confidential procedure- secret.

Branko Cecen from the Center for Investigative Reporting in Serbia (CINS) expressed a concern about a high level of organized crime in Serbia, saying that its "presence is higher than the economic value" of the country. He pointed out that organized crime has a negative impact on everything that is included in Chapters 23 and 24 .

„In Serbia there is no adequate reaction of institutions to the obvious contacts between organized crime and the government, which is unacceptable and will leave huge consequences“, said Cecen.

Serbia lacks the implementation of laws and strategies

The coalition prEUgovor also includes organizations that provide assistance to the members of vulnerable groups. Parts of the report which analyzes the results achieved in the fight against human trafficking were presented by Marija Andjelkovic, President of ASTRA.

"We can not be satisfied only by adopting EU standards, we must also require their implementation - it will be the task of prEUgovor. In Serbia there are no indicators to identify the victim, and therefore only a quarter of trafficking victims are recognised. In addition, the procedure lasts 22 months, and three and a half years is the average sentence for human traffickers. Therefore, human trafficking is highly profitable and low-risk business in Serbia", said the President of ASTRA.

Vladimir Petronijević, Executive Director of Group 484 said that the figures indicate the fact that the implementation of the laws and strategies is a great challenge in Serbia.

"Over the past year in Serbia almost nothing has been done on resolving the issue of asylum seekers. The Law on Asylum is inadequate, not enough was done on acceptance and integration of foreign citizens who are seeking asylum. With the problem of Serbian citizens who returned to the country after being denied asylum deals only police, although the source of these problems has socio-economic nature", said Petronijević, who also stated that all civil society organizations that have expertise in the areas covered by Chapters 23 and 24 are welcome to join the work of the coalition prEUgovor.