Improvement of the executive branch control, system approach to problem solving, and human rights improvement are necessary for progress in Serbia’s accession negotiations with the European Union, it was concluded at the presentation of the independent report on progress of Serbia in the chapters 23 and 24 of the negotiations, made by the coalition "prEUgovor".

At the conference in Media Center in Belgrade, held on May 8th, 2014 BCSP Director Sonja Stojanovic Gajic said that not much has changed in Serbia since the last European Commission report in October 2013, mainly due the elections held in March 2014. However, as an improvement, she stressed the outset of the analytical review of the legislative compatibility with the EU law, in the chapters 23 and 24. In front of about 100 representatives of the Ministry of Interior, Ministry of labor, employment and social policy, Ministry of justice, Agency for fight against corruption, Belgrade chamber of commerce, embassies, organizations of civil society, international organizations, and the media, she pointed out current flaws in the defense system.

“Big problems are a lack of system approach, as well as a poor regulation in the security system. There is a huge concentration of power in the hands of one man. The Bureau for the coordination of the security services, and the National security council of the Republic of Serbia, are not a subject to any control or supervision whatsoever. It leads us to the situation where, thanks to the political will, investigations are conducted by individuals, and the command chain remains completely unknown”, pointed out Sonja Stojanovic Gajic.

Speaking about the problem of corruption in Serbia, program director of Transparency Serbia Nemanja Nenadic said that, for now, we can only talk about announcements of the fight against corruption in the prime minister’s expose, but not about the concrete measures.

“In order to fight corruption, we must have system and institutional solutions. A key problem is a lack of learning from our one and others’ mistakes. Mechanisms used by the previous government are being repeated by this government - lack of transparency in public contracts. We must not wait for the appeal from Brussels to start dealing with corruption. We should initiate it ourselves”, Nenadic said.

While talking about the fight against the crime in Serbia, Director of the Center for investigative journalism of Serbia Branko Cecen said that it remains to be seen whether the trial against Darko Saric, tried for drugs smuggling, will lead to the opening of other judicial processes.

“The arrest of Darko Saric is very important for Serbia, and it is necessary to use this trial to start more investigations. It is worrisome that there are more groups, just as big as Saric’s group, mentioned in police reports, that we know nothing about”, Cecen pointed out.

Participants concluded that Serbia lacks system approach to solving problems related to human rights, reflection on the tools necessary for the implementation of measures, as well as reflection on consequences of the trials to those who deserve protection. It was pointed out that Serbia does not enable victims of violence to exercise their rights. Vanja Macanovic from the Autonomous Women Center pointed out that Serbia has a serious problem with the violence against women, and with the growing number of women who died from the consequences of violence.

“Serbia ratified Council of Europe’s Convention on preventing and combating violence against women and domestic violence. Now the convention should be implemented in the legal provisions, in order to provide more rights for the victims of violence. Judicial reform has prolonged trials even more which makes domestic violence victims’ struggle for justice even more difficult. At the moment Serbia is the only country in Europe that does not have an executive mechanism to monitor the implementation of the Law on gender equality”, Macanovic stressed. 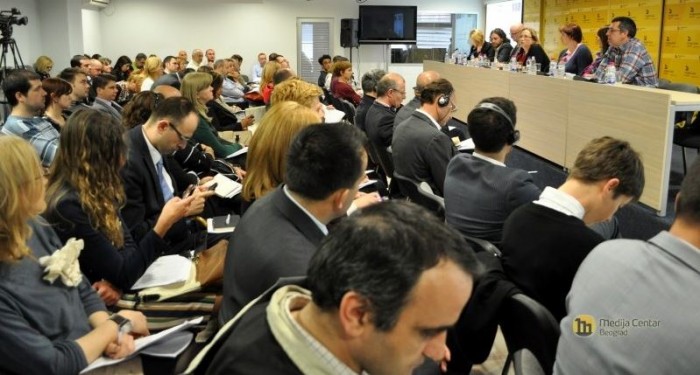 Coordinator of the prevention and education program of the organization ASTRA - Anti trafficking Action Ivana Radovic said that there has not been any change in the fight against trafficking. She pointed out that the implementation of legal provisions in human trafficking is inadequate.

Executive director of the Center for Applied European studies Srdjan Djurovic said that human rights should remain a high priority on the new government’s agenda. He also stressed that we need a better control of the executive brench.

Elaborating upon the changes regarding asylum legal analyst in Group 484 Miroslava Jelacic pointed out that there has been a progress in solving the problem of the accommodation of asylum seekers.

“We have recognized government’s intention to change the Asylum law, which resulted in no asylum seekers who lack accommodation. However, Serbia still does not have an asylum office, although it was incorporated in the Asylum law from 2008”, pointed out Jelacic.