Civil Society is not Sufficiently Included in the Negotiation Process

Compared to the previous report of the coalition prEUgovor, in the implementation of policies under Chapters 23 and 24 there was no progress in four out of seven monitored areas, whereas in the area of media freedoms there was a decline. 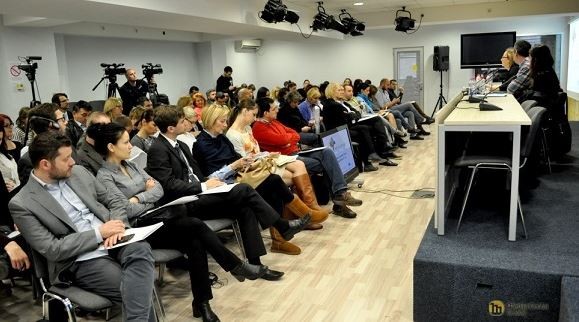 The accession negotiation process of Serbia to the EU is not made public to a sufficient extent, civil society inclusion in this process in not consistent and complete, and the Action plan for chapter 23 needs to be revised, were the main conclusions at the presentation of the prEUgovor report on progress in chapters 23 and 24, on the 14 of November.

The Director of Belgrade Center for Security Policy, Sonja Stojanović Gajić, said that it has been concluded that the government, although formally devoted to include civil society into the negotiation process, is not doing this consistently and completely.

“The negotiation process is not public enough. Negotiating positions of the Serbian Government cannot be treated as confidential in all policy areas, as stipulated in the Negotiation framework. The problem is that the ministries in charge do not give feedbacks to the opinions submitted by civil society organizations. In order for a two-way communication to be established, it is necessary that institutions at least provide explanations why certain suggestions were not accepted,” BCSP’s director pointed out during the presentation of the report of seven NGOs gathered around the coalition prEUgovor.

Transparency Serbia’s Bojana Medenica said that the quality of the Action plan for the chapter 23 does not correspond to the significance of this chapter for Serbia’s two priorities - fight against corruption and the EU integration, and that it should be thoroughly revised. During presentation of the report created by seven NGOs from coalition prEUgovor on the progress of Serbia in chapters 23 and 24, she pointed out that it is of crucial importance that this action plan becomes as complete and high-quality as possible, because Serbia’s obligations from this document will be in the EU’s focus over the years to come.

“If Serbia uses ‘the less we sign, the easier we will fulfill our opening requirements’ logic, it will only make our job appear easier, but the fight against the corruption will remain inconsistent and without real effects for the citizens of this country”, she said.

She reminded that “very dissatisfying results” especially in the fight against the corruption may become an obstacle for EU integration, and that it is important to identify key problems in the start and to determine appropriate measures.

The Plan incorporates measures that are anticipated by the Action plan for implementing the Strategy for Fight against Corruption, but also sets new deadlines and institutions in charge, which opens up a question of monitoring the implementation of Strategy, she added. Some deadlines are unreasonably long and the modifications of the Freedom of Information Act have been rescheduled for the end of 2015, she said. Medenica also stated that the concept of coordination of public institutions in fighting against corruption from the political top was wrongly set up, and that it neglects the constitutional principle of separation of powers. She added that some areas important for fight against corruption on a systemic level have been left out because the Plan does not deal with the problem of avoiding competition and transparency during conclusion of international agreements, or the leakage of criminal investigation information into the media.

Backsliding in the freedom of speech and the media

It was concluded that Serbia moved backward when it comes to freedom of press and speech. As the director of Center for Investigative journalism in Serbia (CINS) Branko Čečen assessed, the state reaction to providing information during the floods forecasted “a new and special” approach to the media. He stated the example of removing the show “Utisak nedelje” from the TV B92 program, and added that the testimony of Olja Bećković, the author of the show about the pressures coming from management and the prime minister of Serbia has not been refuted.

“This represents a very dangerous situation. We  are aware that this has been going on for quite some time now, but this is the first time that we feel a substantial decline in the freedom of speech.”, he stated. Qualitative and quantitative analyses, regarding the presence of critical and negative content directed to the current government, especially in electronic media and press, remain to be done. What concerns us is that it is very obvious that we are making giant steps backwards instead of going forward, because objectivity and the freedom of information are one of the requirements for EU integration”, said Čečen, reminding that the EU has expressed concern over the jeopardized freedom of speech in Serbia.