The first CHATvrtak organized by the coalition prEUgovor brought together about 20 representatives of state, civil society organizations, embassies and international organizations interested in the polices covered under chapters 23 and 24. 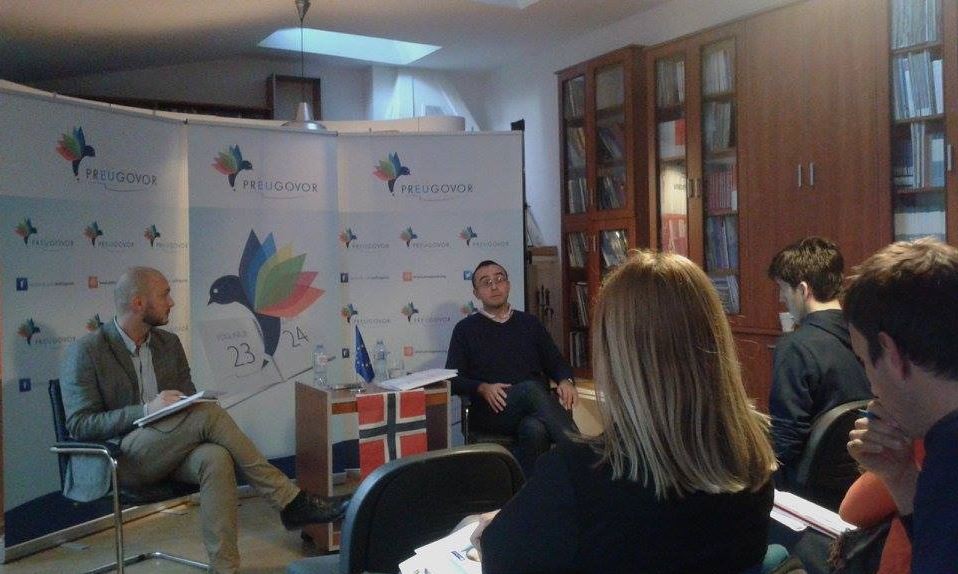 The lack of dialogue at the European level is one of the main reasons for absence of an adequate response of European countries to the refugee crisis, was the conclusion of the first CHATvrtak which was held on 29 October 2015 in the library of the Belgrade Centre for Security Policy.

BCSP Researcher Bojan Elek presented the idea of CHATvrtak, the mission of the prEUgovor which consists of seven civil society organizations and also expressed his gratitude to the Embassy of the Kingdom of Norway and the OSCE Mission to Serbia for supporting the work of prEUgovor.

The Executive Director of the Group 484 Vladimir Petronijevic presented the Action Plan for Crisis Response in 17 points, which was recently adopted by the European Commission in cooperation with the countries of the Western Balkans. This opened a dynamic discussion during which participants concluded that, despite the intention to come up with a unified response to the crisis and migrant solution for Western Balkans route, the adopted Plan raised more questions than it answered. Participants stated that the plan looks like the product of rapid compromise and it puts some very tough requirements  for the region that already has many challenges. Members of civil society organizations emphasized the importance of debate, particularly in circumstances in which Europe now finds itself, but also expressed doubts that the European values have potential to respond to such a challenge.

CRITICISM OF THE EU ACTION PLAN FOR MIGRANTS

The gathered representatives of civil society organizations stressed that the Plan is designed to protect the security of the borders of Europe, not the safety of migrants. It raised the question of the rights of refugees as well as the legal basis for the exchange of personal biometric data, which is proposed by the Plan. The participants concluded that the Western Balkan countries do not have sufficiently developed border capacity required for the full implementation of the Action Plan and that the Plan itself does not represent a solution to the current crisis, but only a continuation of policies so far implemented in practice.

Discussing the role of Serbia in the refugee crisis, the participants concluded that as a society and as a country Serbia respond to the refugee crisis with high level of empathy. However, a lot of time was previously wasted and an opportunity was missed to arrange an asylum system, which is why Serbia faced the migrant crisis unprepared at the institutional level. It was pointed out that the participation of Serbia in the formation of a new law on asylum issues at the European level would be very significant, considering the fact that Serbia will have to harmonize its legal framework in the EU integration process. A question of the status settlement of unaccompanied children was also raised, where the participants discussed about what are the best interests of the children and how to achieve them.

Participants emphasized the fact that the considerable lack of dialogue on the integration of refugees is a big problem. It was concluded that the current dialogue and policy will not make migrants feel welcome on the European soil and they will not successfully integrate into the community even after the resolution of their legal status. The attitude of the participants was that the European Union recently manifested particularism which is not expected from a primarily political community, but also that Europe needed strong political leaders and open debate in order to face the current challenges.

Every last Thursday of the month, Coalition prEUgovor organizes CHATvrtak - informal dialogue in accordance with the Chatham House Rule. The aim of this activity is to improve the dialogue between the representatives of the state, civil society organizations, academic institutions, embassies, international organizations, media and other public professionals interested in the implementation of policies in the field of the rule of law (Chapter 23) and freedom, security and justice (Chapter 24).