Police Cooperation of Serbia and Kosovo is practically paralyzed

The absence of direct cooperation between police and judicial authorities of Serbia and Kosovo in the vast number of cases makes these bodies paralyzed and unable to fight criminals, who remain unpunished - it was said at CHATvrtak discussion organized by the coalition prEUgovor. 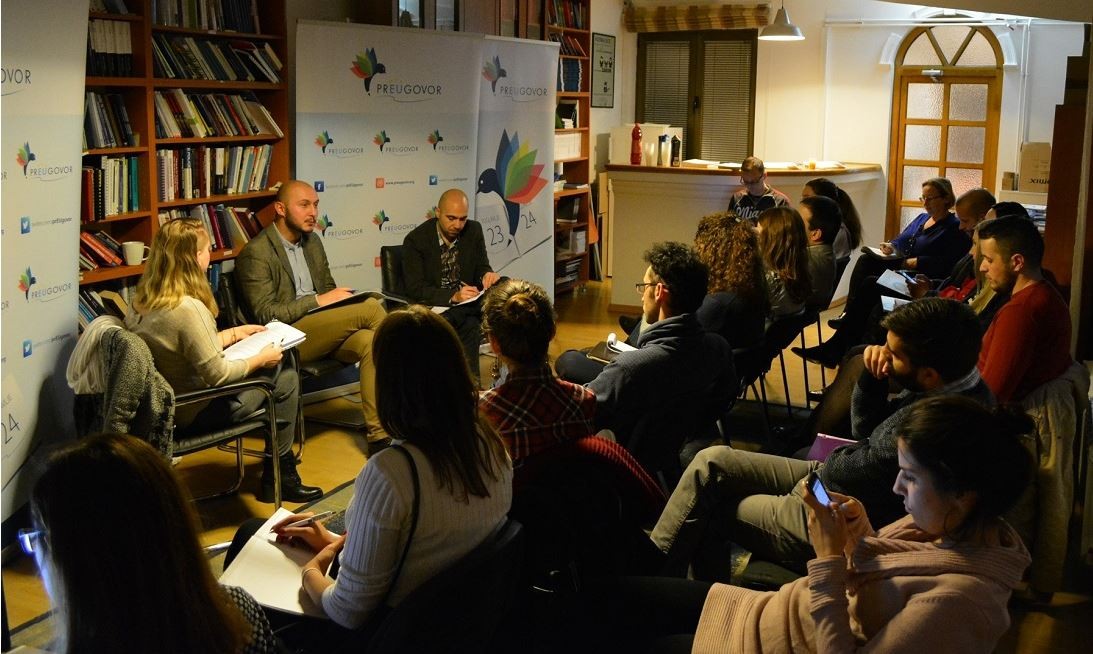 The topic of third CHATvrtak is the state of play of police cooperation between Serbia and Kosovo, as well as the impossibility of tackling organized crime between the two as a consequence of lack of progress in this area. Experience and knowledge in this field were presented by a BCSP Researcher Bojan Elek and journalist of CINS - Serbian Center for Investigative Journalism Andjela Milivojevic.

Within the Chapter 24 of the accession talks between Serbia and the EU, Screening Report for this area states that Serbia has to establish the same level of police cooperation with Kosovo as with any other neighboring country.

The currently available version of the Action Plan for Chapters 24 states no concrete measures with the aim to fulfill this recommendation, as it is expected that this issue is to be dealt with under the auspices of the Belgrade and Pristina negotiation platform for Chapter 35. However, while Belgrade and Pristina are negotiating, organized criminal groups cooperate freely due to lack of effective mechanisms for tackling them. Moreover, normalization of relations between Serbia and Kosovo is, together with the fight against organized crime, one of the priority areas within the accession process to the EU, which is why it is necessary to establish effective ways to promote it.

Chapter 35 is specific for Serbia and no other country had to deal with such or similar chapter on its path of European integration. This means that Chapter 35 does not have its acquis, like all other chapters. What worries is the fact that the negotiation process is not sufficiently transparent and citizens have no access. The process of adopting negotiating positions for Chapter 35 is confidential, which is not the case with other chapters.

However, while Belgrade and Pristina are negotiating, organized crime groups work together smoothly because effective mechanisms for the suppression of their activities do not exist. With the normalization of relations with Kosovo, the fight against organized crime is a priority for Serbia within the framework of negotiations on EU membership, so there is a need to establish effective mechanisms for its suppression as soon as it is possible.

CURRENT SITUATION IN THE FIELD OF POLICE COOPERATION

Direct police cooperation between Serbia and Kosovo does not exist except for few agreements which were recently signed. It performs on an ad hoc basis through using creative ways of cooperation since the formal legal conditions for it practically do not exist. For example, in March of this year,a meeting of heads of Serbian and Kosovo police was organized and it was the first direct meeting of police chiefs of the two communities.

The most functional cooperation is through ILECUs mechanism (International Law Enforcement Co-ordination Units), supported by the EU. It allows connection to contact points with Europol, Interpol, Eurojust, national judicial authorities etc. Through this informal mechanism there is an exchange of information of great importance for police and judicial cooperation, but it is bad that the information obtained cannot be used before the courts because they are made in an informal way.

Police cooperation between Serbia and Kosovo is mainly done through mediators such as UNMIK and EULEX, which often known to slow down the process. Policemen of two communities have to find creative ways to oppose the criminals though operational activities, but regarding the issue of combating organized crime these methods remain very limited. Unlike the police and judicial authorities, criminals unfortunately use the situation and cooperate without any problem.

CRIMNALS USE THE GREY ZONE AND REMAIN UNPUNISHED

Criminals often know very well how to abuse situation in the conflict zones and turn in their favor. There are numerous examples of criminals who use the specific situation in which are Serbia and Kosovo to remain unpunished for the crimes they were charged with.

An indicative example is the case of a senior official in Kosovo, who has been accused of corruption, and against whom an investigation was launched and a trial started. However, as the official was born in Bujanovac, she left Kosovo and went to Bujanovac so that judicial authorities have been unable to locate her because Kosovo cannot send a request for extradition to Serbia. The accused remained long enough in Bujanovac so the criminal procedure statute of limitations passed and, once it did, she returned to Kosovo as if nothing had happened. Institutions remain powerless before this, as well as in many other cases. There is also an example of a man from Serbia, who carried 12kg of military explosives in his car and transferred it from Serbia to Pristina, before Kosovo police received the information about it and managed to arrest him. Kosovo Prosecution has contacted Serbian prosecutor's office and the Ministry of Justice. They informed them that the arrested person is accused of terrorism, but Serbian Ministry of Justice could not answer because Serbia does not recognize Kosovo. Serbian Prosecution today does nothing regarding this case, whereas a defendant, who is a Serbian citizen, is being tried for terrorism in Kosovo.

Organized crime also "blossoms". The most abused is the possibility of illegal crossing from Serbia to Kosovo and vice versa. Using illegal ways trucks transport the widest variety of smuggling goods on a daily basis and no one is controlling and stopping that. Other cases that are frequent include thefts of vehicles from the EU followed by false documents and drug trafficking.

Kosovo police cannot exchange information with the Serbian counterparts directly, but through mediators, such as EULEX, and that slows down the process. There has to be some kind of cooperation between police and judiciary, because criminals cannot remain unpunished. Serbian Ministry of Interior has no information about what happens in Kosovo and cannot follow cases important for Serbia. Criminal investigations should be carried out jointly, when it is needed.  It takes a lot more control of administrative crossings to prevent the smuggling of various goods.

It is necessary to sign an agreement between the two parties with a goal of combating organized crime through the establishment of liaison officers, but also the focus of the political and formal matters has to be transferred to the operational cooperation of the two communities.