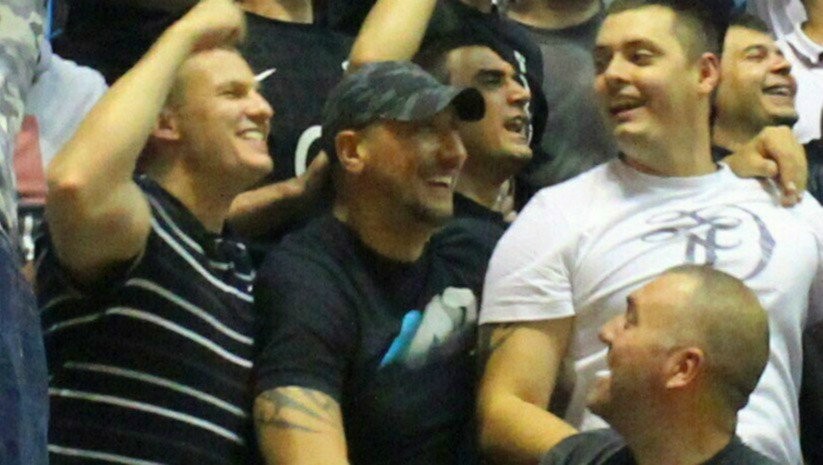 The case from December 2013 reveals a direct connection between Nenad Vučković called Vučko, member of Gendarmerie, and the group of Partizan supporters who demolished the café belonging to the leader of other group of supporters of the same club, Aleksandar Vavić. Vučković was never interrogated about the incident.

In the article by Ivana Jeremic it si written that in end of 2013, a group of men, including Veljko Belivuk and other Partizan supporters, participated in demolishing of the Belgrade Hollywood café, owned by Aleksandar Vavić. At the same time, the leading group of supporters Alkatraz and the newly-established group Janjičari were fighting for dominance on the south stands.

Documents which are for the first time published by the Center for Investigative Journalism of Serbia (CINS) reveal that following the incident, member of the Gendarmerie Nenad Vučković - Vučko took over the keys of a car in which the attackers were riding. However, the prosecutor’s office never interviewed Vučković in relation to his role in this event.

Media wrote about Vučković and his connections with Partizan supporters and the Janjičari group on several occasions. Thus, the Insajder published a photo from the stands on which he was in the company of the murdered Aleksandar Stanković, called Sale Mutavi, but also the several times convicted Veljko Belivuk, known as Velja Nevolja.

Stanković was killed in October 2016 in the vicinity of the District (Central) prison in Belgrade, when he was shot at several times by the still unidentified attacker.

Until October 2016, Vučković was also a member of the Assembly of the Partizan football club as a representative of a group of supporters.

In April 2016, members of the Working group which managed Partizan, including Milorad Vučelić, president of the Sports association Partizan, accused Vučković of having ordered supporters to throw eggs at members of the Administration at the football match Partizan - Mladost from Lučani, together with Novak Nedić, Secretary general of Serbian Government. In its press release, the group stated that Vučković and Nedić “tended to expand the atmosphere of fear and public lynch” so as to prevent the Assembly session.

CINS has already written about Novak Nedić‘s influence in Partizan.

The public does not know much about Vučković and his role on the stands. CINS journalists tried to establish the grounds on which he was engaged first in the military, and then in law enforcement. Sources from the Ministry of defense did not submit information, stating that they could not possibly establish who it was all about. The Ministry of the interior (MUP) replied to the question of whether internal control procedures were conducted against Vučković in the same manner; it also failed to respond for four and a half months to the request for access to information of public importance on his engagement with the Gendarmerie.