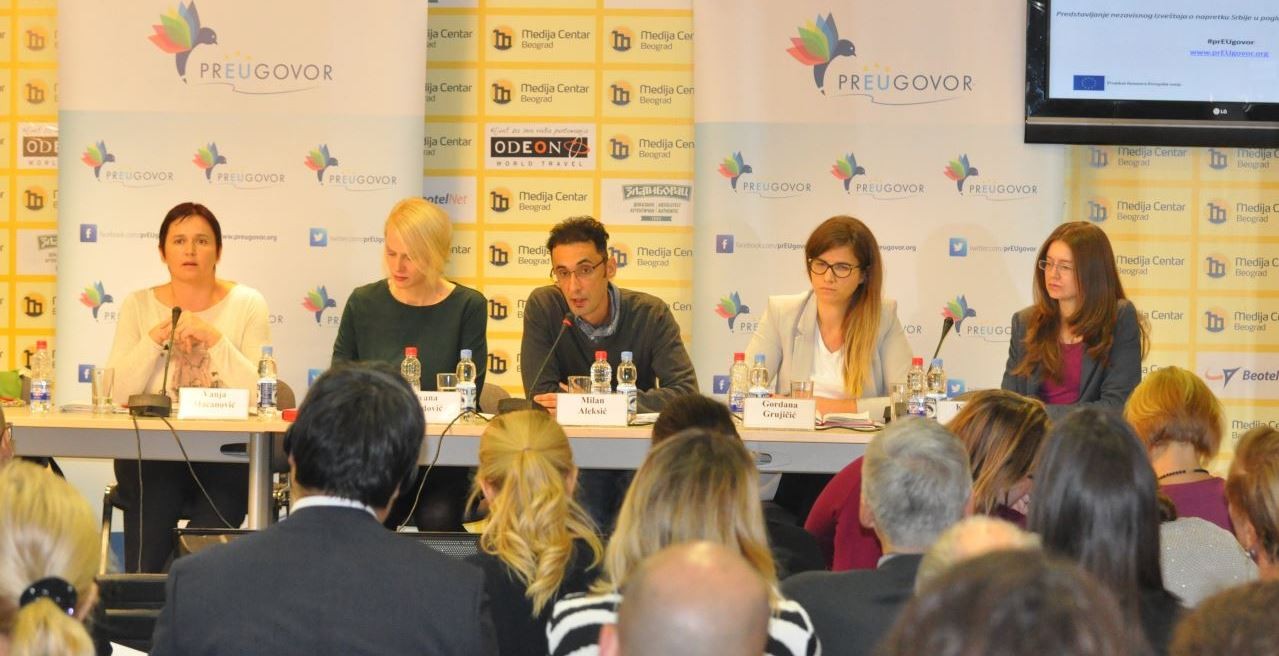 Substantial progress in policy implementation under Chapters 23 and 24 of the acquis is nonexistant, number of activities foreseen in the action plans for these areas is delayed, and the data on these segments of the negotiating process are lacking and non-transparent, are the main conclusions of the coalition prEUgovor conference held on October 25, 2017 at the Belgrade Media Center.

Ninth Independent Report of the prEUgovor coalition tracking the areas of Judiciary and fundamental rights (Chapter 23) and Justice, freedom and security (Chapter 24) was presented at the conference. Representatives of the coalition agreed that more attention should be paid to the transparency of the negotiation process and the fight against corruption.

"The area of ​​fight against corruption is one of the most problematic in the new prEUgovor report. Not only that any progress is lacking, but it seems that this area is a lower priority for the Serbian government. This can be deduced from the fact that in the last exposition of Prime Minister Brnabic, the fight against corruption has been mentioned only a few times", stated Milan Aleksic from the Center for Applied European Studies, who is also the editor of the latest issue of the Report.

The implementation of the Law on the Prevention of Domestic Violence is one of the positive developments in the past six months, Vanja Macanovic from the Autonomous Women's Center points out. Some application problems still exist.

"One of the problems in enforcing this law is the lack of a single centralized electronic database, which was supposed to have been made before the start of its application. Since the goal was to connect the databases of the social security centers, the police and the prosecutor's office, this complicates regular monitoring of the implementation effects . A very small number of civil proceedings was initiated ex officio, for measures against domestic violence", says Macanovic.

One of the largest problems in the governmental reports concerning the fulfillment of the action plans for Chapters 23 and 24, is that there are often no data illustrating the effects of their implementation, Macanovic emphasizes.

The adoption of the new Strategy for the Prevention and Combating Trafficking in Human Beings, six years after the previous strategy expired, is another positive move within Chapter 24, adds Ivana Radovic from ASTRA - Anti Trafficking Action.

"Of all the funds allocated by Serbia for financing the activities of the Strategy, the Ministry of Information commited the most, although the Ministry of Internal Affairs and the Ministry of Labor, Employment, Veterans' Affairs and Social Affairs are key actors for this part of Chapter 24. We see that governmental reports state that, the large number of activities do not require additional funds, while on the other hand, the most common risk for unsuccessful application of action plans is great work load of the employees. This makes the implementation of the Strategy almost impossible", Radovic says.

Positive steps have been taken through inclusion of migrant minors in the education system of Serbia, and so at this moment about 500 children of migrants are attending some 27 primary and secondary schools in Serbia, said Gordana Grujicic from Group 484.

"In addition to the Ministry of Education, other working bodies have contributed to this area. The proposal for a new Law on Asylum is in the parliamentary procedure, and a number of by-laws that need to regulate this issue are also being drafted. On the other hand, the Law on Foreign Citizens has not yet been adopted and the Strategic Framework in the field of migration still does not exist, Grujicic adds.

The Draft Law on Changes and Amendments to the Law on the Security and Information Agency (BIA), which is currently in the parliamentary procedure, continues the trend reduction of civil and democratic control in the security sector, said Belgrade Center for Security Policy researcher Katarina Djokic.

"Announcements of other legal solutions that are subject to the concentration of authority in the hands of the director of the BIA are also problematic. Such concentration is troubling not only because it would jeopardize the impartiality of the agency towards political parties, but also because there is a risk that the BIA will become a state within the state, that it will prescribe its own competencies", concluded Djokic.

The conference is a part of the project "prEUgovor Policy Watch: Monitoring Reforms in Chapters 23 and 24", funded by the European Union.